On the Frontier of Dispute Resolution

RSI’s Susan Yates is the leader of a nationally recognized organization devoted to developing programs that help people with limited resources settle their disputes outside of court. 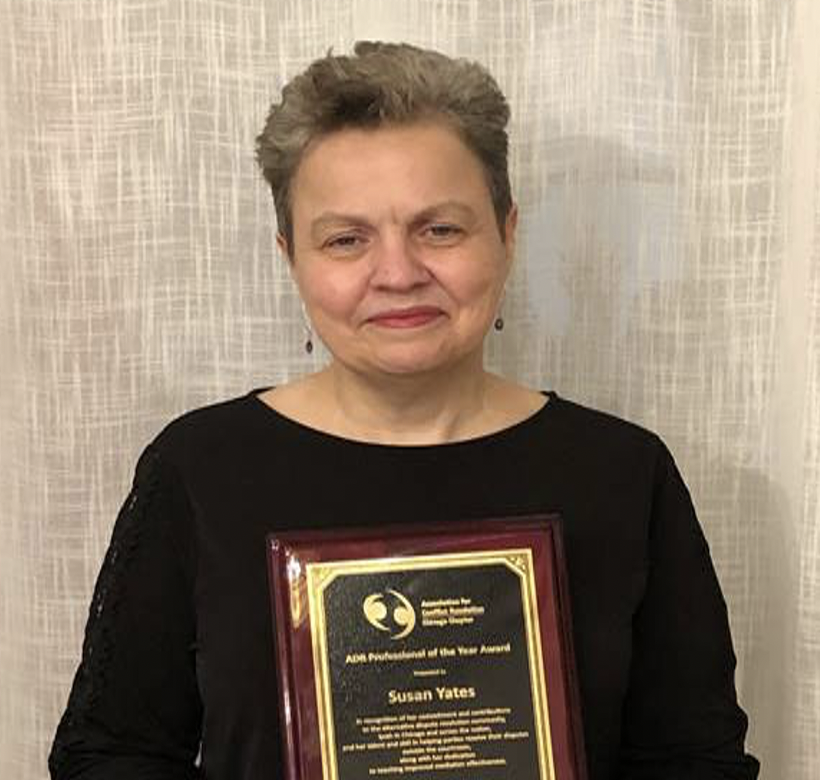 Susan Yates is the first and only Executive Director of Resolution Systems Institute, which for over 25 years has been nationally recognized for helping courts improve access to justice through mediation and other forms of alternative dispute resolution (ADR).  We talked to Susan recently about her perspectives on court sponsored ADR and her plans for RSI’s future.

RSI is a not-for-profit charitable institution.  How would you describe its mission?

RSI’s mission is to improve access to justice by strengthening court ADR.  RSI is a resource for research and evaluation of court sponsored mediation and other ADR programs.   We help courts to develop ADR programs and train mediators, and we evaluate programs.  We also maintain a resource center that collects, catalogs and disseminates information pertaining to court sponsored ADR programs which allows those who are interested access to the latest thinking and information on these subjects.

Unlike so many in the ADR field, especially those who have anything to do with the courts, you’re not a lawyer.   How did you get into this?

I’m actually one of the few people who went directly into the field.   Even today, people ask me how I got into ADR — what’s your professional origin?  The model for mediators, in particular, has always been that you have to have done something else — been a judge, lawyer or therapist, for example — for many years before you can be a mediator.   I’m living proof that it isn’t so.  I tell people that my professional origin is as a mediator.

I got interested in mediation in college, at the Cornell ILR School, the labor relations program.  I learned about mediation, arbitration and negotiation.  The School, though, was divided —  the students were either management or labor, and the two sides never really communicated.  I thought this conflict was so wasteful. Right out of college, I got a job working for a union in Chicago.  An ILR alum told me about Neighborhood Justice of Chicago (now called the Center for Conflict Resolution, or CCR), which was then providing mediation training for volunteers.  The very next two weekends I was trained as a mediator and I was hooked.  I started mediating regularly for CCR.  The upward track for volunteers at CCR was very fast, and, in addition to mediating, I became a trainer.

OK, so you became a volunteer mediator and trainer with CCR.   How did that lead you to RSI?

In 1985, the Executive Director of CCR left, and I was hired to take his place.  There I was, at the age of 27, running an organization.  I knew about mediation and fundraising, but I certainly had no experience as an executive director.  I was the administrator, strategic planner, marketer, fundraiser, lead trainer, and the guinea pig mediator whenever we started a new program.  I did that for four years, left to do some consulting on my own and then took a full-time development job.  During that time, CCR and local ADR leaders saw the need for an entity that would research and evaluate court ADR programs that they called the Center for Analysis of Alternative Dispute Resolution Systems — a real mouthful, CAADRS — which ultimately changed its name to RSI.  So, while working full time, I was asked to do a consulting job for CAADRS on the side, recommending the qualifications for mediators of large case court mediations.  At the meeting at which I presented my report, they asked me to be the first Executive Director — really, the first employee, of CAADRS.  That was in 1995 and that’s what I’ve done ever since.

Give me some examples of projects that RSI has undertaken.

Well, our first focus, all those years ago, was to help those Illinois circuit courts that were interested — and a reasonable number of them were — develop major case mediation programs.  We would explain the pros and cons of different ways of operating programs and help them decide what they wanted to do locally.  We would bring a training team to town and train lawyers that the judges had identified as their most respected civil litigators to be mediators.  Then the court would provide us data on how the programs were doing — the kinds of cases that were mediated, how many came from which judge, resolution rates, and so on — which we would make public.  At the same time, we were developing our resource center.  The internet age was just beginning, so initially we had books on shelves and newsletters that came in the mail — a lot of paper.   We had enough so it had to be catalogued and we did that, and, with the internet, we put that catalog online.  We keep that data base and material updated, and people can search it and find things for themselves.

More recently, during the housing crash of the last decade, we set up and actually ran mortgage foreclosure mediation programs in several Illinois circuit courts, focusing in particular on serving people who lacked the resources to hire lawyers to help them protect their homes.  The Illinois Attorney General used some funds from lawsuit recoveries to improve the foreclosure situation, and we were able to have a full-time staff member in each court to run the program.  We trained and provided the mediators and conducted comprehensive evaluations of all the state-funded programs in Illinois.  We found that mediation was able to help more than 1,100 people save their homes, even though those people were not usually represented while the lender always had a lawyer.

We really have two major items on our agenda.  We are partnering with the University of California, Davis, to evaluate court online dispute resolution (ODR) programs nationally, focusing initially on three very diverse and widely separated states.  We are especially focused on ODR as a means of providing access to justice — serving people who don’t have resources to devote to resolution of their disputes, especially parties who are not represented by a lawyer.  Most typically, these programs involve small claims, such as disputes between small businesses and consumers or landlords and tenants. Some also work with family cases, such as parenting plans for the children of divorcing spouses.  We are actually finishing up a report on family court ODR for thinly-resourced parents, courts and communities.

The second major item is residential evictions.  In Illinois, like other states, the Governor has issued an order preventing evictions in most cases because of the Covid pandemic.  Once those orders are lifted, there will be a wave of eviction cases because many tenants have not been able to pay rent for months.  The second CARES Act provides money to states for tenants’ rental relief, money that goes directly to the landlord once the tenant is approved for payment.  But we don’t know when someone can apply, how long it will take, how it relates to other financial and legal counseling, and how we fit that into a 28-day eviction process prior to a mediation. We are working on developing an ADR program in one Illinois circuit to deal with this coming wave.  We are hoping that the availability of funding and the interests of landlords in keeping tenants who will pay something toward their back rent and pay something in the future will be helpful to everyone.  We will need money to hire a staff person for screening, to advise people who want to participate what they need to do and to administer the program.  The staff person would also find out whether they are capable of participating — things like is there a language barrier, do they have access to necessary technology if ODR will be used, and are there other barriers.   If funds are available we would also like to provide staff to evaluate the program, write up guidance for others, and share our findings more broadly.

What are you most proud of?

I’m proud that we’ve taken something from an idea to an organization that’s nationally known as a reliable and well-respected resource for court sponsored ADR programs.   I’m also proud that Jennifer Shack, the second-most senior employee of RSI, has become one of the country’s most respected researchers and evaluators of court ADR programs.

Most would say that people should sit down and work out their differences when they can.  This is easy to say, but once people get into conflict — especially in court — they want to win.   People need ADR to help them figure out what they really want and what they are willing to give up to get it.  At the same time, courts need to be sure that people have a justice event — believe that they’ve been treated fairly – when they go to ADR.  ADR and ODR will be used more as people experience its benefits.  By working with courts, we can help achieve that sooner.

We at RSI want anyone who participates in ADR to feel that they’ve experienced justice — that they’ve been heard and been treated with respect.

RSI sees court-related alternative dispute resolution as a way to provide access to justice to people who otherwise couldn’t afford it or would be intimidated by the court processes. People can work with an online program or with a mediator to reach an agreement with the other side in a way that is understandable and respectful and enables them to put the dispute behind them.