Jim Shima is a Star Wars fan like no other. You could say that he has a knack for bringing Star Wars to life. Literally. 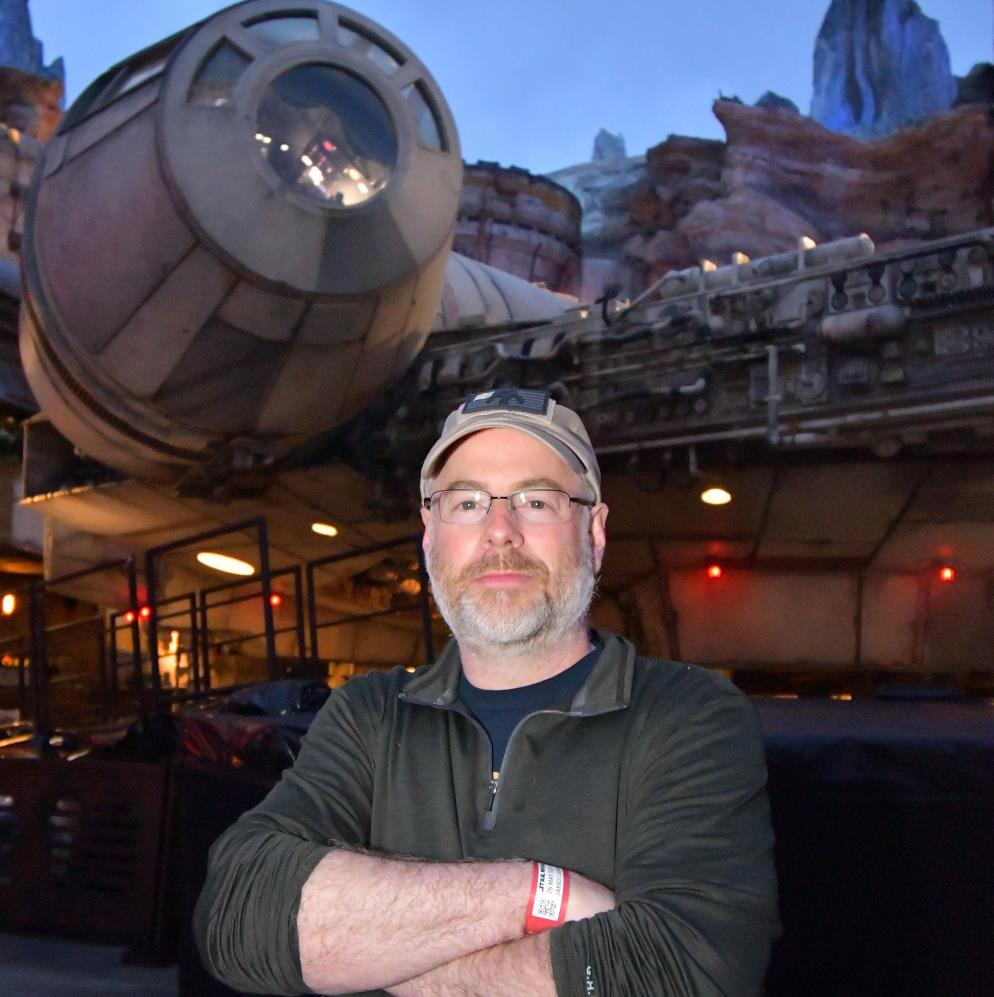 Everybody loves gadgets, and there aren’t many more exciting gadgets than the ones fantasized about in the universe of George Lucas’ Star Wars. Lightsabers. Carbonite. X-Wing fighters. Droids. A life-size, functioning R2-D2. These are the things that Jim Shima brings to life in his spare time.

How did you get started on this fantasy journey?

I’ve been involved in the replica movie prop community for over 20 years. I started a basement company back in 2001 called “Hyperdyne Labs,” a play on the android company from the blockbuster movie Aliens. I had been playing around with different inventions, specializing in professional grade electronics and integration of realistic features for movie props. I thought if I liked a certain prop creation I was working on, perhaps there were other discerning fans who would also like it. And if I was making more than one, I could offer it up for sale.

Since then, I’ve focused on high-end products that contain features that I would want in a display. That is, things you wished you could have as a kid, or “toys for big boys” as it were. Because of my background in advanced technology development at aerospace and high-tech companies, I’ve been able to almost make the “real deal.” Unfortunately, the technology in sci-fi movies is as impossible to find as “unobtainium” so my full-scale R2-D2 can’t actually fly an X-Wing fighter. My main interest is in combining modern technology with high-end creations that bring the movie studio effects closer to the home collector. Plus, this stuff is just cool.

How have your creations played out in “the real world”?

My work has spanned some of the most iconic sci-fi universes – including Star Wars, Star Trek, Battlestar Galactica, Ghostbusters, Aliens, Men In Black, and more. Some of my creations have even made it into movies and TV, including my lightsaber technology that was acquired by Disney for The Force Awakens. I also have had full-size droids and props featured in the movie Fanboys as well as on local TV stations. I have also custom built large “working” props for Skywalker Sound, Skywalker Ranch, and Wings over the Rockies aviation museum. Of course, a lot of fan-films have used realistic props made by Hyperdyne Labs, from Ghostbusters proton packs to voice changers and, of course, lightsabers.

I designed an entire interactive experience for Lucas Film’s ¾ scale X-wing fighter housed at the Wings over the Rockies museum near Denver, CO. The X-wing fighter was originally made in Germany at the direction of Lucasfilm for the release of the Star Wars trilogy special editions circa 1995, and was the last one in existence. To make it come to life, I designed and installed all custom electronics for motion activated sound, automated R2 dome movements with lights, and an entirely interactive cockpit display. The immersive experience even has interactive graphical and sound playback of Luke Skywalker’s Death Star trench run from the iconic initial Star Wars movie, “Episode IV – A New Hope.”  The idea was to excite children’s imagination and interest in aeronautics and technology by getting as close to Star Wars as possible.

What’s the key to reaching your audience?

The majority of my props and displays focus on interactive experience.  Each prop interacts in someway with the user or audience – through motion activation, tracking people, voice feedback, or interaction via lights, buttons, and switches.

For example, I invented a real-time voice changer – which can modify one’s voice in real time to sound like Darth Vader, Boba Fett, a Stormtrooper, C3P0, or even Iron Man, and more. The miniaturized system unit was tested by Ben Burtt, the legendary sound designer behind the sound effects in Star Wars, Indiana Jones, ET, new Star Trek, and other iconic movies, and creator of the original lightsaber sound.

I developed the patent on motion-based lightsaber sound generation using digital accelerometers. In fact, every lightsaber prop today uses the same technique I invented in 1998. The hum of the lightsaber for dynamic swinging sounds was difficult to create outside of a movie studio. I was able to replicate these dynamic sounds in real time with electronics mounted inside the hilt of a prop lightsaber. It made an impression on Ben Burtt, so interactivity makes a real difference!

I’ve made props for famous Star Wars fans such as Seth Green, Ben Burtt, Simon Pegg, and others. I even (somehow) impressed the last man on the moon, Gene Cernan, with my fully-functioning R2-D2 unit. I programmed R2 to play out NASA transmissions of Gene from his moon mission. I still treasure his kind words to this day.

One of the more viral props I did was the Death Star corn hole game. Complete with sounds, lights, taunts, etc. You play an X-Wing pilot attempting to blow up the Death Star by getting a bag inside the exhaust port. People went nuts for it. I followed that up with an imperial Battle of Hoth version. This way you can have an Imperial and Rebel team square off in cornhole! The added feature was that each team gets a remote control so they can taunt the current tosser.

Where can folks learn (and see) more?

My R2 is one of a handful worldwide vetted by LucasFilm to stand in for the real R2-D2 in official events. So I suppose my R2 can be considered the real deal! 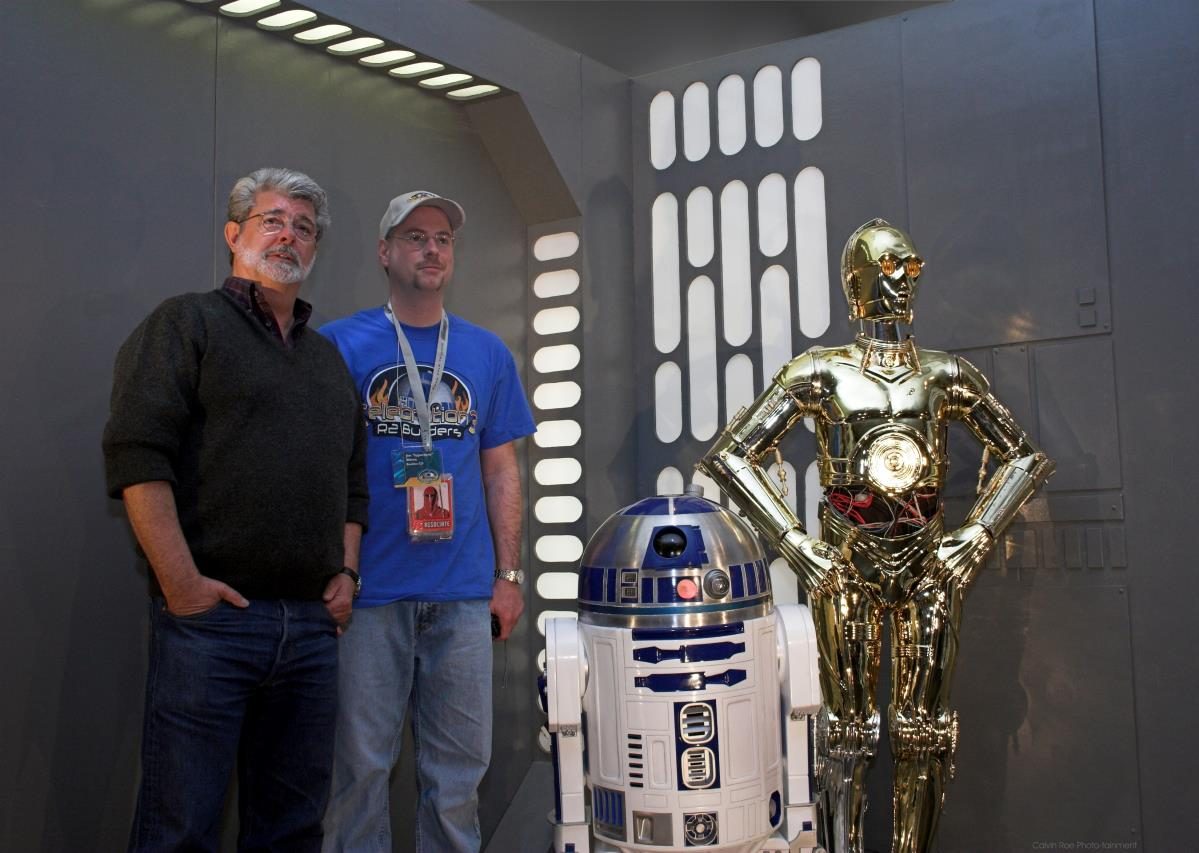 I’ve always told people that Star Wars was responsible for my becoming an engineer. Growing up in a lower-middle class single parent family, we didn’t have much. But once I was introduced to Star Wars, it followed me throughout my childhood – inspiring me to draw, learn science, and do well in school. I wanted to create devices and widgets I saw in the movies .. no matter how implausible they were.