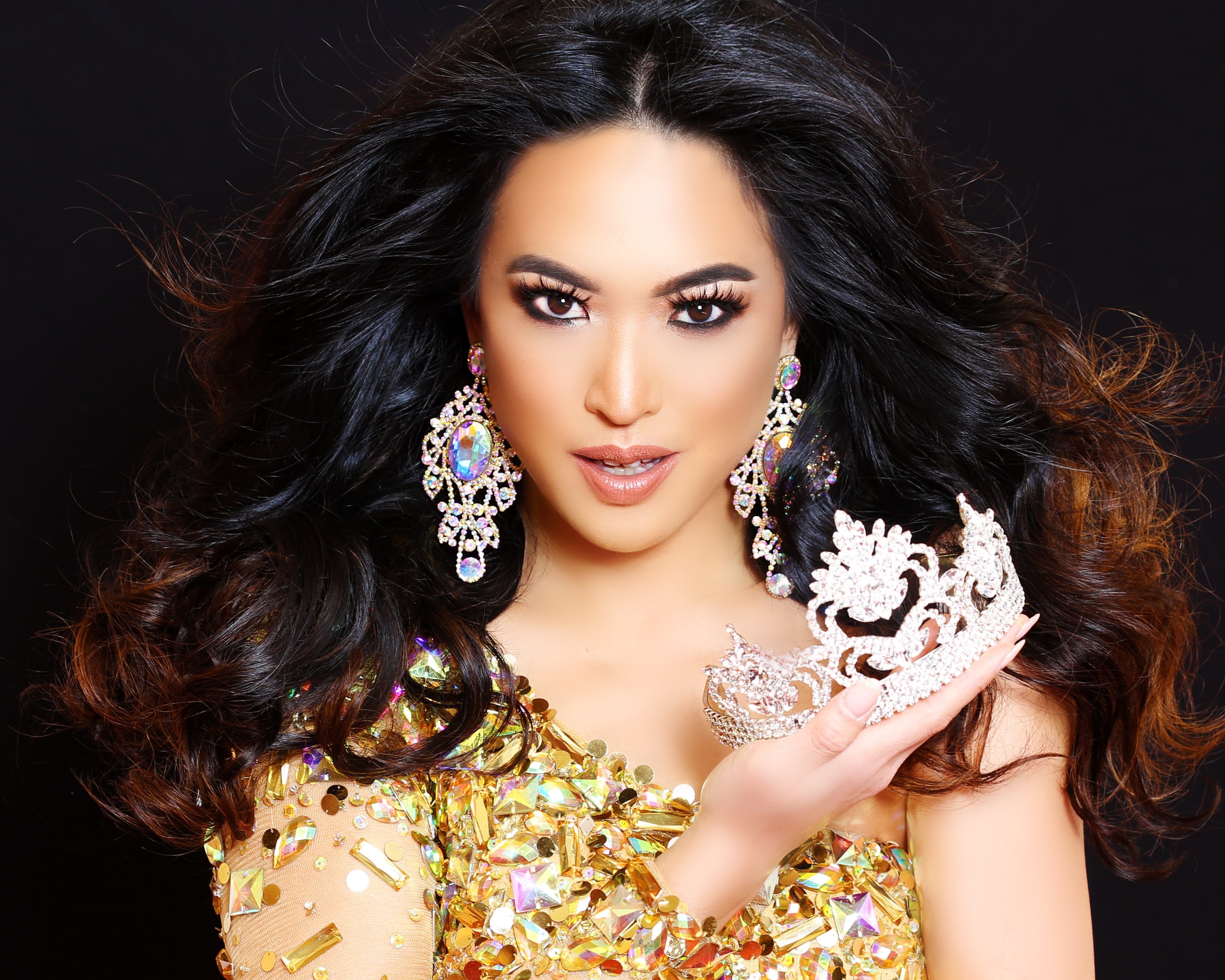 You’ve accomplished a lot.  Tell me about the transitions in your life – from Taiwanese immigrant, to law practice in New York, to international beauty pageants.‍

It’s been quite a journey.  When I immigrated to America with my family, I was eight years old and spoke no English.  My parents were strict about education and I was a good student.  I eventually became an attorney and I focus on the defense side of commercial litigation.  I did some modeling when I was younger but had no substantive experience with beauty pageants before I entered the Mrs. New York pageant in 2017.  I ended up winning Mrs. New York on my first try and was able to use my position as Mrs. New York to support women’s empowerment and causes that matter to me.

‍I'd love to hear more about how you’ve used your titles to promote charitable work.

I've always been active in volunteering.  As a first-generation immigrant family, we really leaned on the community.  After being on the receiving end of so much grace, I knew from an early age that helping others was important.  When I became Mrs. New York, I wanted to help bring resources to underserved immigrant communities, especially after-school activities for children.   My crown and sash gave me a platform to help people who felt forgotten or disenfranchised and that inspired me to keep going on my pageant journey.

David Marmel, president of Mrs. World, Inc., asked me to organize a pageant in Sri Lanka titled “Mrs. World 2021” [Mr. Marmel died of cancer last September].  He knew I had an extensive network of personal and business relationships in Sri Lanka, and I agreed to do it.  I was a one woman show, I did everything, starting with contacting people I knew in Sri Lanka, then drafting proposals and making pitches to potential sponsors, deciding dates, securing the hotel venue, locking in the sponsorships -  really, every single thing necessary to bring my vision to fruition.

‍You were representing Mrs. World, Inc., but you created a separate company called Mrs. World, LLC, which is a bit confusing.  Why was that necessary?‍

David gave me the license to produce the Mrs. World 2021 show. David said, "Listen, Alice, this is your show anyway.  I give you full rein and full authority to run it.  This is your brainchild.”  So, with David’s full knowledge, consent and encouragement, I created Mrs. World, LLC as the production company for the Mrs. World 2021 pageant.

‍And I assume the new company had a separate bank account?‍

‍When it was necessary to visit Sri Lanka to work on pageant arrangements, you covered your own travel expenses.  Why was that?

A press conference is essential to gain coverage for recruiting contestants and sponsors.  It was important that I launch the press conference in the first quarter of the year and not waste time since the pageant was supposed to be in November 2020.  David was very sick by February and was undergoing chemotherapy treatment.  The last thing I wanted to do while he was battling his cancer was to ask him for money to buy an airplane ticket.  I imagined we’d settle up at some point, which I guess was naïve, but I’m a problem solver and a go-getter and I thought, "Let’s just get this done."  I bought the airplane ticket four days before my departure, the very last minute. I flew to Sri Lanka at the end of February.   As it turned out, Mrs.World never reimbursed any of my expenses.

‍And was there any discussion between you and David about the profits that might result from the Sri Lanka pageant?

We never got to that, never talked about it once. To be honest, I never even thought about it.  I feel embarrassed saying that now, but everything happened so quickly.  I started planning in December 2019 and by the end of February 2020 I was on my way to Sri Lanka.  I was just in the zone of getting things done; that was my only focus.  At the same time, David’s health condition was becoming progressively worse, so we just never got around to that discussion.

But at some point, you did talk about the possibility that you would purchase Mrs. World, Inc.  Why were those discussions unsuccessful?

Well, he wanted a lot of money for the company.  I did want to work something out and I told David I would explore a bank loan.  My business attorney requested financial statements, tax returns, outstanding contracts, commitments, debts and so on.  David refused to provide any documents and, in fact, he seemed insulted by my business attorney’s request, so our discussions went nowhere.

‍In the meantime, Mrs. World, LLC received a deposit from Sri Lanka sponsor organizations, which David asked you to transfer to Mrs. World, Inc.  Why was he requesting that and why did you decline?

I can only speculate, but I imagine that he may have had some financial challenges resulting from his health condition, that the pageant was his only source of income and that he needed the money urgently. But, I also imagine that request may have been motivated by his anger with me for not buying Mrs. World, Inc. on his terms.

I couldn’t transfer the money because it was Mrs. World, LLC, not Mrs. World Inc., that had a contract with the Sri Lanka sponsor organizations for the Mrs. World 2021 Pageant.  At the time of David’s request, we were at the beginning stage of the pandemic and I was unsure if the pageant would take place as planned in November or be postponed.  A lot of variables were unknown at that time.  I explained to David that it was best to wait a few months to find out how the pandemic might affect the November pageant date and the sponsors. David refused to wait and he wanted me to transfer the sponsors’ money to him in April.  That was not the right thing to do.  I wouldn’t budge and our relationship deteriorated from there.

‍In fact, you and David had a very warm relationship up to that point.  Yet just a week after refusing his request, Mrs. World, Inc. issued a press release describing you as “disgraced” and accusing you of lying, stealing, and creating a “web of ugliness.”  Why do you think Mrs. World, Inc. did that?

I was very hurt by the press release and I think it reflected David’s anger over my refusal to transfer the sponsorship deposit to Mrs. World, Inc. and me standing my ground.  At the same time, David was very ill and was looking for somebody to take over Mrs. World, Inc., and he may have seen me as the only candidate.  When I didn't agree to buy the company, I think that greatly upset him.  I also imagine he may have felt threatened by the possibility that I could become a potential competitor.  Mrs. World, Inc. wanted a monopoly on married woman beauty pageants, and David knew I was well known in that niche industry.  Since I wasn’t going to buy Mrs. World, Inc., I expect he didn't want me to have any chance as a competitor.

‍Any regrets about the way you handled your discussions and correspondence with David or your refusal to transfer the sponsorship deposit?

None at all.  During the week preceding to the press release, I received so many emails from David, sometimes every two or three hours.  Every email was asking, or demanding, that I send the funds that were in the Mrs. World, LLC account.  But I was determined not to let myself be bullied or intimidated.  What’s right is always right, and I followed my conscience.

‍And just to be clear, those funds are still in the LLC account?

‍You’ve filed defamation actions in federal court against Mrs. World, Inc. and against one of its officers.  What outcome are you hoping for?  What’s most important to you now?

What's most important to me is my reputation and the truth. I want to set the record straight. Everything I did was with the explicit authority and permission of David Marmel.  I never lied and I never stole.  My primary goal now is to just clear my name and preserve the integrity of my reputation. I want the truth out there.  This is very important to me.

‍Given everything that’s transpired, and with the benefit of hindsight, what personal decisions would you change if you could?

I wouldn't have gotten involved at all; I just would have stayed out of it completely.  Putting together the Mrs. World 2021 pageant in Sri Lanka was my blood, sweat and tears. It was a 100% passion project and I spent so much of my heart, time and skills on it.  I wanted to create something fun, international and glamorous. I wanted to ensure that all the contestants had a great experience.  I wanted to bring about something positive.  Instead, I lost a lot of my own time and money and I was defamed.

‍What’s become of the pageant in Sri Lanka?

I don’t really know.  Right after the press release, Mrs. World, Inc. announced that it was going to proceed with the pageant.  To say I was unhappy would be putting it mildly.  It's clear to me that the whole point of the press release was to disrupt the business relationship I had developed with the Sri Lanka sponsors, whom I personally secured, and to reap the benefit for Mrs. World, Inc.  But with the pandemic, I don't think anything has happened.

‍You’ve had quite a year.  Looking forward, what’s next in your life?  What do you want to pursue now?

I'm starting my own pageant brand.  It's called Beauty Redefined Pageants and represents a new generation of beauty pageants that will celebrate beauty, confidence and glamour in a way that's inclusive and diverse.  The first pageant will be this coming winter in New York City.  You can read about it at www.brpageants.com.

I still believe in the power of pageantry to provide a unique platform for women to better themselves.  Every woman’s goal and journey is different, and competing in a pageant can be a great experience for personal growth if the pageant is conducted in the right way and sets the right tone.  I believe that beauty and glamour can be especially empowering if the pageant also reflects inclusion and diversity.